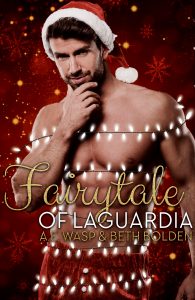 Once upon a time, a hockey player and a baseball player walked into a bar...

After taking a unscheduled detour on the way to his grandmother’s house, hockey player Red O'Reilly finds himself snowed in at the airport. What could have been a bleak Christmas Eve indeed suddenly turns magical when Owen “the Wolf” Lindsay, a wicked pitcher with an irresistible charm who Red's been crushing on for years sits down next to him in the last open seat in the bar.

If Owen had left New York when he was supposed to, he wouldn't be trapped in the worst airport in the world. He also wouldn't have met the sexy, irrepressible young Red and that would have been a tragedy. Could it just be coincidence that they are both in the same place at the same time?

No, this has to be something much stronger than coincidence; they just might have a bonafide Christmas miracle on their hands.

“You shouldn’t lie on Christmas,” a clear voice said quietly as soon as the bartender left. It wasn’t his whiskey drinking neighbor, it was Blush Boy. “You’re going to get on Santa’s naughty list.”

The guy had finally stopped pretending not to notice him, so Owen could get a good look. He was young, maybe early twenties. A fine specimen of youth with bright red hair, a sweet smile, and the body of an athlete, he seemed as happy and as eager to please as a Golden Retriever.

And since Owen was becoming a garbage pit of a person, that sweet eagerness combined with that young hard body made him want to do bad, dirty things to the kid. If his flight hadn’t been leaving soon, Owen might have tried to pick him up. He might have to be ‘Owen Lindsay, the baseball player’ to do it, but for those soft, pillowy lips and blue eyes, he’d make a few sacrifices.

The kid’s smile widened. “Yeah, you are Owen Lindsay,” he said confidently. “I would’ve recognized you anywhere. I totally had your poster on my wall growing up. I looked at it a lot.” His eyes drifted down over Owen’s chest. “Like, a lot.”

Well, what do you know? Owen’s gaydar was pinging big time and he had a hunch he knew exactly which of his posters pretty boy here had spent some quality time with. Years ago, he’d posed naked for one with only a strategically-placed glove standing between him and a public indecency charge. Christ, had that really been almost a decade ago?

“Is that so?” Owen asking, sipping the orange juice the bartender had set in front of him. “And how much of that time did you spend staring at my face?”

The boy blushed bright red, which made him look even more adorable, but he didn’t look away. “Some,” he answered with a half-smile. He shifted on his stool, angling his body more towards Owen.

Maybe there was a bit of the Wolf left in Owen after all. Something about this kid made him feel like a predator stalking a particularly tasty bit of prey. Since neither drinking, working out, nor playing the stock market had worked to distract Owen from his impending midlife crises, maybe he should give mindless casual sex a try. After all, according to a hundred and one employees at this airport, his flight was bound to be delayed. He had to kill the time somehow. He could think of worse ways.

Owen swiveled his bar stool until he was almost entirely facing the other man. “What did your parents have to say about that,” he asked.

The kid blushed again, the pink heat trailing down his neck and disappearing beneath the neckline of his t-shirt.  “I hid it behind a Britney Spears poster,” he admitted.

“How heteronormative of you,” Owen said with a grin.

“Or crafty,” the kid said, holding up a finger and grinning back. “It all depends on your perspective.”