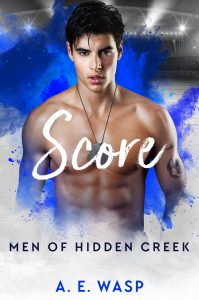 Home is where you make it.

Beau Hopper is good at goodbyes. A minor-league hockey player, he goes where the league tells him. Single and estranged from his family, Beau drifts without connections or commitments. He makes a living, not a life.Former Marine Connor Casey’s life revolves around his siblings. After Hurricane Harvey took their home and a car-crash claimed their parents, Connor is determined to rebuild their house and their lives.When Beau learns Connor might lose custody of his siblings if he can’t finish the rebuild in time, he volunteers to help in exchange for a place to stay, and it isn’t long before he finds himself in Connor’s bed. It takes more than passion and plywood to build a home, so when the league comes calling after Beau, Connor can’t ask him to stay... but how can he ever let him go?

There aren't enough stars in the galaxy to tell you how much I loved this book!

I have SO MANY FEELINGS about this book, and all of them good! I am a big fan of AE Wasp, but Score immediately became my favorite book she has written. Connor and Beau are just.. ahh <3 <3 <3 this story stole my heart and won't give it back

A little boy in a suit opened the front door at Beau’s knock. “Are you here for the wedding?” he asked.

“Wedding?” Driving up to the two-story plantation-style house, Beau hadn’t been sure he was at the right place.

Now he really wasn’t sure. He’d been expecting Connor, the hot mechanic from the auto shop, not a midget undertaker. Who was this kid?

“Yeah,” the boy said, turning and walking away from the open door. “Mac and Cheese are getting married. That’s why I’m wearing the suit. My name’s Benji. I’m six.” Despite sporting a miniature version of Connor’s haircut, the hair on the top of his head stuck up in the most accurately-named cowlick Beau had ever seen. And he’d seen a lot of people get licked by cattle.

“He’s my brother,” Benji said. The kid kept talking as he walked down the hall. “We have a different last name, though, because he had a different dad. “Mine’s Bennett.”

Oh. Well, maybe Connor was babysitting. Beau hesitated, not sure if he should follow. He’d put the odds of Connor calling him for something besides the van repairs at fifty-fifty. He’d given a booty call the best odds, then coffee, then an actual date. Taking Beau up on his offer to help with his house in exchange for room and board was the dark horse in the betting pool.

But call he had, and that very same night. Beau had played it off like it didn’t matter to him either way, but the way his pulse had jumped at the sound of Connor’s voice said otherwise.

Google Maps had led him to this place, and it had never let Beau down before. Well, except that one time in L.A. when he’d ended up in Riverside instead of Santa Monica, but L.A. highways sucked anyway. He didn’t blame the nice Google voice lady.

“I only wore the suit to the funeral before,” Benji said, disappearing down a side hallway like the white rabbit Alice had followed into Wonderland. “That’s why Sean won’t wear his,” the now-disembodied little voice said. “It makes him sad.”

Beau was starting to identify with Alice as he walked down the hall, past empty rooms in various states of construction.

Voices drifted down from the back of the house.

“Micah, I refuse to superglue a hat to a guinea pig’s head,” he heard Connor say with a hint of exasperation. “I am sure the ASPCA would have something to say about that.”

“Connor,” Benji yelled, “there’s a man with cool blue hair here for you.”