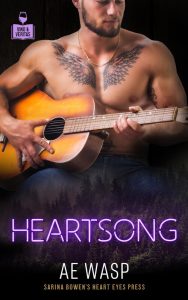 "It just figures that the first guy I’m bringing back to my place is cute, single, and totally off-limits..."

Sean Johnson has spent his life waiting to get the hell out of West Virginia. His plans got derailed when his dad shipped him off to “pray the gay away,” but he’s over it, ready to prove that he’s a grown-ass man who can take care of himself. Of course, he’d have a better chance convincing himself if he could stop lusting after his grumpy roommate.

Army veteran Cooper Hill returned to Vermont minus one leg and one career, but determined to build a new life. When an army buddy asks Cooper to keep an eye on his nephew, a junior at the local college, Cooper can’t say no. He’s expecting a sheltered kid. What he gets is a gorgeous young man whose brilliant poetry gives voice to everything Cooper’s been trying to express. He wants Sean more than he’s ever wanted anything. And somehow, miraculously, Sean wants him too.

But wanting each other isn’t the same as being good for each other . . . especially when past pain threatens to write its own verse in their song.